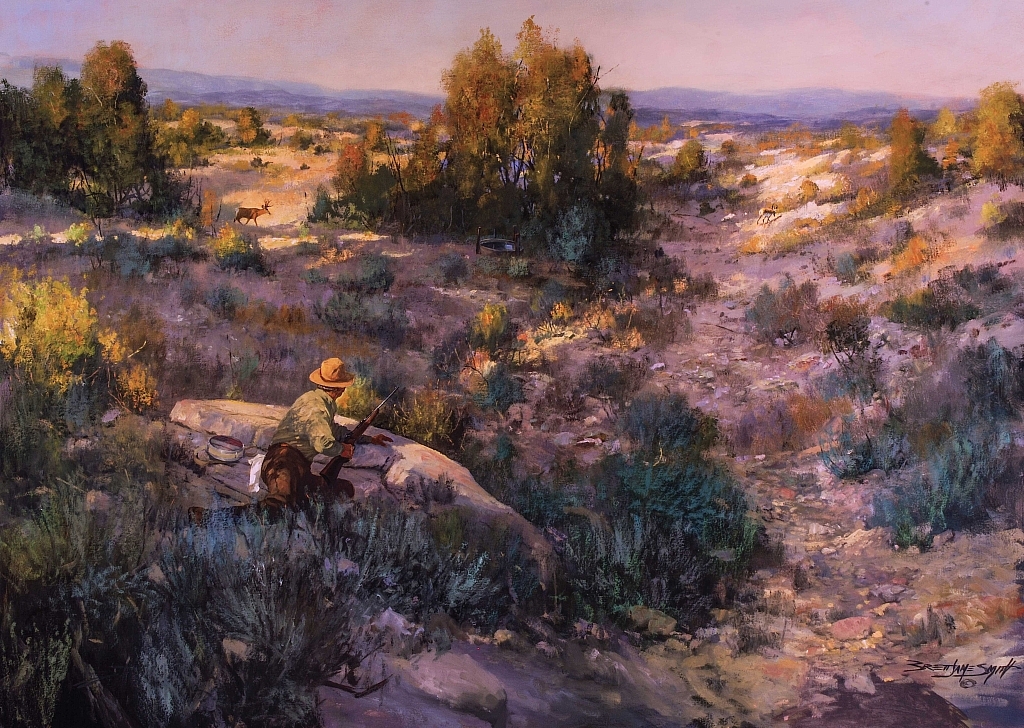 Lessons from the hunt on living and dying.

MY DAD HUNTS. He’s hunted my entire life. Chances are, he’ll keep hunting until he’s too old to carry a gun or walk in the woods. Part of me knows he’ll die on a hunting trip, like his friend Gene Camp did years ago, hunting caribou in Alaska. Gene crawled into his sleeping bag one night and didn’t climb back out. They found him the next morning, stiff and staring. Dad says that’s the way to go, eyes up to a cold, star-streaked sky.

I can’t remember a time when hunting wasn’t a part of our relationship. Each fall, Dad would pack his truck, leave with a few other men, and return a week or two later. They left with clean, shiny cheeks and came back with beards smelling of woodsmoke and pine sap. In the back of his truck were usually the stiffened bodies of a few deer. The neighbor kids came out to look. Everyone talked about the antlers, but it was the eyes that fascinated me. The way they stared, wide and glassy, at nothing. I touched those eyes, and they were soft and crinkly, like grapes wrapped in thick, clear plastic. The other kids said the dead deer were creepy. But my dad said they were beautiful, and I believed him.

IT BEGAN WHEN I WAS EIGHT. I was sitting in the shadow of a big juniper, face forward to an expanse of sagebrush stretching to the horizon. Dad sat next to me. We said nothing. We just sat and watched. Somewhere out there, Dad’s hunting buddy Jerry was crawling on his belly through the sage, stalking the pronghorn buck he had dreamed about for 10 years. Jerry and my dad kept applying for this exclusive tag in northeastern California, and at last they got lucky in the draw. They planned the hunt of their lives, and for some unaccountable reason decided to take an eight-year-old boy along.

In the shade of the juniper, just feet away from sunbaked ground hot to the touch, I began to doze. Twenty hours earlier, Dad had rousted me from my sleeping bag in the predawn dark. I could hear the music of a small stream next to our campsite—a sound that to this day reminds me that I believe in God. Later, I walked behind Dad and Jerry through the sagebrush flats for what seemed like miles, still in the dark, until finally arriving at the exact bluff Dad had scouted the day before. There we sat, still and silent, waiting for the sun to rise and for my dad to shoot the giant pronghorn buck that he somehow knew would be there, and was. Despite all the walking that morning, the most important thing I did that day was to be quiet and still.

For nearly an hour I watched the hawk unmake and consume the dove.

Which is exactly what Dad and I were doing there in the shade, sitting together, the day after he shot his near-trophy, not seeing Jerry on his belly out in the sage but knowing he was there, when without warning five pronghorn materialized in front of us, just 20 yards away. They had come in off the sage flats—unseen by us, us unseen by them—heading to a watering hole behind our tree. I could see the heavy thickness of their horns forming black hearts above their heads as they turned our way.

Jerry was out there on his hands and knees, crawling in search of what stood not 20 yards in front of us, unaware. They were so close I could see their nostrils flare with each breath, in and out. Still and silent, we watched them move off to our right and beyond out of sight. They never knew we were there.

JANUARY, SOME 35 YEARS LATER, southern Michigan. I’m a father myself now, standing at the kitchen window, when I heard what sounded like a wet, heavy snowball hitting the house. I looked out and saw an adult Cooper’s hawk upright on the snowy ground, its rufous breast and slate-gray back standing out against the snow. The bird appeared confused, turning its head back and forth then tilting it down, back up and around. At first I thought the hawk must be stunned from flying into the house. Then I noticed that the hawk wasn’t standing in the snow but on the puffed-up body of a mourning dove. Its orange boney feet gripped the dove, flexed, and gripped again, and I realized the sound must have been the dove flying into the house as the hawk chased it from the backyard bird feeders. The hawk’s movements had not indicated confusion; it was more a wary predator’s satisfaction.