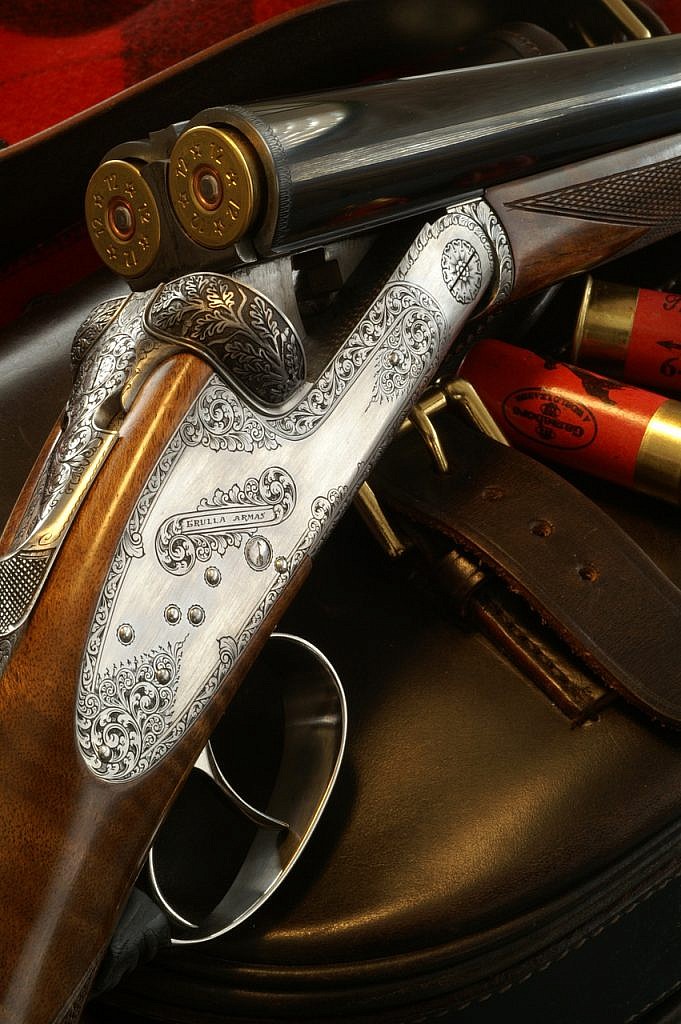 The Windsor Woodcock employs the standard engraving layout of the Grulla Windsor model, its highest grade at that time. It has since been superseded by the Grulla Royal. Note the oak leaves on the fences.

As I have mentioned frequently (too frequently, some would insist) my whole conception of shotguns changed one day in 1993, in the Holland & Holland show room in London.

I was handed an old Boss game gun, one of a pair, and for the first time I realized just how beautifully balanced and responsive a side-by-side could be.

The key word is “could.” Boss & Co. achieved this phenomenal weight/balance ratio through a combination of meticulous hand work, including striking the barrel walls down as thin as the proof house would allow, trimming here, filing there. No machine-made side-by-side has ever achieved this nor, I firmly believe, ever will.

At any rate, although I was a few farthings short of the asking price (£40,000 for the pair, as I recall) it occurred to me that, if I couldn’t buy a Boss, I could have a Boss-like gun made by my friends in the Basque Country. Aha.  Easier said than done. Over the next nine years, I had half a dozen guns made, coming a little closer each time, but never quite achieving it.

Finally, on September 11, 2001 (yes, that very day) I had lunch in Deba, on the Basque Coast, with José Luis Usobiaga, director of Grulla Armas, and explained my wishes.

The problem had been, again, proof house requirements. The key to the Boss was its thin barrel walls, which reduced weight but allowed the barrels to be longer, redistributing the avoirdupois in such a way that the balance was exquisite. With standard steel, this was not possible.

José Luis suggested a way around it: By having barrels made of F1275 steel, instead of the F14 (or, occasionally, F15) that was standard with Basque guns, the proof master would accept thinner walls because the steel had a greater strength rating.

The reason F1275 is not used normally is because it’s very hard to work, almost impossible to engrave, presents difficulties with tinning the rib, and cannot be blued by standard methods. Also, it requires a special order to the foundry to get the barrel blanks that go together to make “chopper lump” barrels in the English style. All of this is expensive.

No matter, we thought. If that’s what it takes. We settled on 29 inches for barrel length. The other major factor was the frame. Since the goal was a gun weighing 6 lbs., 4 oz., I would be shooting moderate loads so, with that in mind, José Luis decided he would build it on a round-body 20-gauge frame, further reducing and redistributing weight.

The gun was ready for delivery in June the following year, and I went to Spain to pick it up. As you can see from the photos, it was a darling. I wanted oak leaves on the fences and a woodcock on the floor of the action, which Grulla’s master engraver, José Abaigar, executed beautifully. The gun was designated the Grulla Windsor Woodcock, and added to the company catalogue.

My overall purpose was to create the perfect gun for ruffed grouse and woodcock, so we choked it “nothing and not much.” It weighed in at 6 lbs., 5 oz.  John Robertson, proprietor of Boss, would probably not have accepted that extra ounce in 1900, but I was happy to.

In many ways, my Windsor Woodcock is the best-made gun I own. The major pins (screws) all have tiny set screws, ensuring they do not back out on their own. Such nuances do not, of themselves, make a ‘best’ gun, but they help. They are so small, they are easy to overlook.

One gunmaker who was attempting to dismantle the locks called me in frustration, asking what was keeping the screws from coming out. I’d forgotten to warn him. Fortunately, he did no damage, although I suspect he wanted to.

In the end, we came as close as I believe it’s possible to come to the feel of that long-ago Boss, given the different constraints on gunmakers today. If nothing else, it was highly educational, and it demonstrated beyond doubt the capabilities of the Basque gunmakers.

Gray’s shooting editor Terry Wieland was stranded in Madrid for five days after Sept. 11, glued to the TV in a hotel near the Puerta del Sol and eating every night at an Argentinian restaurant that served only (!) steak.  It could have been worse.