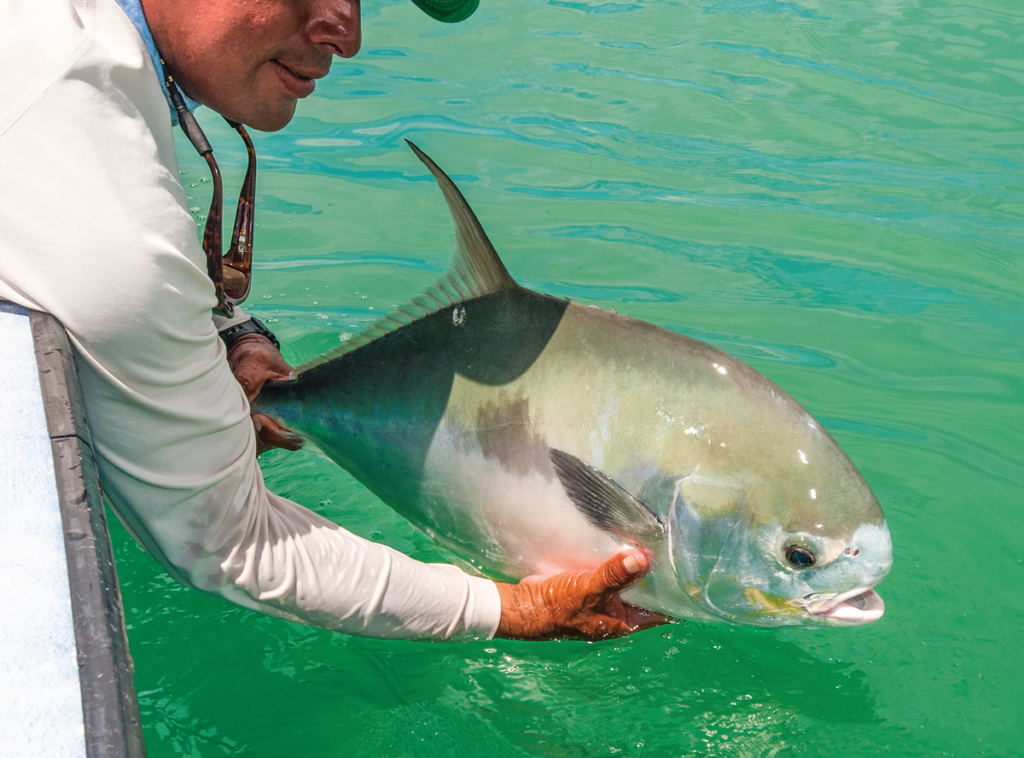 WHILE CAULKER HAS HAD A THRIVING TOURISM INDUSTRY FOR DECADES, there is little doubt that ancient Mayans used Caye Caulker as a base to fish and hunt sea turtles. The island’s large freshwater spring, La Agueda, was also a boon to early British mariners. Roving buccaneers evidently filled and recorked their water vessels here—lending one theory to the island’s original British naming as Caye Corker. It’s modern name likely derives from the protected La Ensenada bay on the island’s western side, where ancient sailing vessels were hauled and caulked.

The island’s low land mass is little more than a sandy, limestone coral outcropping close to the barrier reef. Ken tells us that the water depth reaches only about 15 feet, meaning you can follow fish over a broader area compared to the more southern Belize cayes, where tides are much more important, given that the surrounding flats quickly drop into deep water. Caulker’s topography means that permit—as well as larger tarpon—are often in water of six feet or so, moving and feeding over grass, rock structure, crumbly bottom.

Classic shallow wading to tailing permit is not the norm. In fact, in deeper water, you’re wise to first drop your fly and leader over the side, do a count-down until the fly hits bottom, giving you a starting point on how to lead the fish—if they are grubbing. But of course, they’re not always on bottom. There is something else in today’s gospel according to Ken. “You need to be aggressive here,” he says. “With all our fish, not just permit, not like they fish other places. Throw it in their face!” Really? Permit? No letting them come to a dropping fly?

“Yes, permit, too! And aggressive casting all the time!” Ken is cranked, miming instruction on the poling platform. 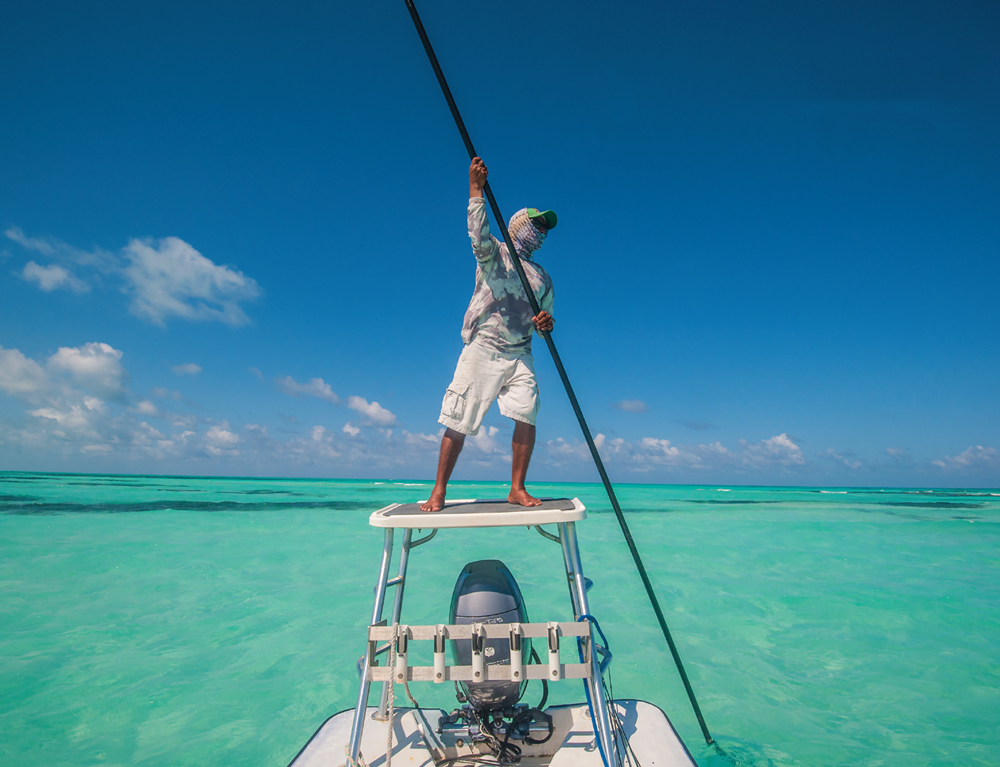 “Same. I’ll show you.” After a couple of missed permit opportunities, we could use some confidence building, and Ken knows it. He heads to a typical shallow bonefish flat. There is a nice bouquet of tailing fish trembling there. One of us makes an easy lead, not wanting to spook the fish.

“No, no, throw it on their nose!” Ken directs. “Look, they’re eating in the eel grass. Too much lead, and the fly sinks in the grass. Try again.”

That works, and we catch some typically small Belizean bonefish, not the size of those yard dogs of the docks.

“The other thing, on a big school that’s out of the grass, if you cast too close, the school can split,” Ken warns. “Then you can gamble and let the fly sit and wait because the school’s probably gonna come back around. Sometimes it doesn’t, though.”

One big group of bones does the split but won’t circle entirely back. We are too impatient to keep waiting. No matter; they let us pick off a couple by casting at the group holding at the flat’s edge. Ken is pleased, for now. He entertains us by aiming the black panga head-on at a wall of mangroves. As Dave and I get ready to bail, the mangroves open on a narrow serpentine channel. Ken just grins at us.

The wind has died, and it will stay down at least two days. We run 20 minutes toward the mainland to a thin stick impaled in the bottom. This one, unlike others we’ve seen scattered over miles of water to mark lobstering grounds, is a fish “waypoint.” Ken tells us it’s a place where permit, big jacks, tarpon, and sharks are possible. But bad luck, there are dolphins terrorizing schools of small jacks, the only fish unwise enough not to flee. The jacks offer some quick entertainment, and then we flee the stick for tarpon and permit.

In our first of several tarpon encounters, the fish are rolling. Surprisingly, some are larger than expected, but this does not dissuade Ken from attacking our Puglisi mullet streamers with scissors, artistically sculpting them into smaller baitfish. Two other distant boats hook up. Our flies pass by a few casual fish swirls, but we get no eats. At least not here.

There is a broad channel, an interesting shallow bank, and a piece of planted structure—a sunken tire—not far from shore that promises entertainment. For us, the tire becomes a kind of traffic rotary around which fish seem to navigate. Though Ken thinks tarpon, Dave’s retrieve brings two good permit zooming in. “Ten more feet,” Dave says. “If I’d had that much more before the boat, I think they’d have eaten.”

Then there is an explosion near shore. Dave believes it is a belly flopping crocodile, but in reality, it’s a pelican crushing dinner. More important, it alerts us to the waking fins of baby tarpon tight to shore. Ken directs Dave’s casts relative to a spot of greenish-white bottom. Left, right, center-on—again and again, he commands mid-cast direction changes. Regardless, Dave plucks one of the little guys using the barbered fly. Thereafter, the place is known as Crocodile Beach. 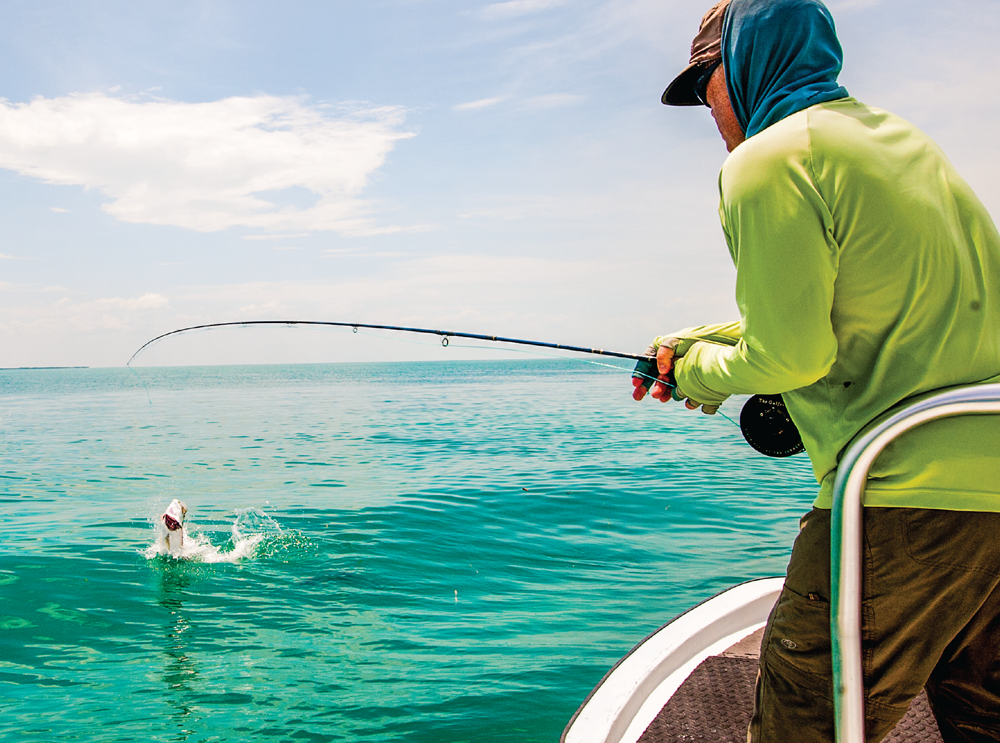 We have remarked on the seeming lack of sharks and larger barracudas in the shallows compared to the Keys or Bahamian flats. Perhaps there’s a relationship to cudas being found on many restaurant menus, including in the overice trays of various fish and shellfish displayed outside Rose’s place, where you choose your fish and wait while the cook grills it. Perhaps not quite the variety of Hong Kong’s Hung Kee restaurant, but Rose’s preparations are fine and lure us back several times, though we pass on the barracuda.

The wind is still down, heat building, and Dave has finished off seven bottles of water. There are tarpon near pilings, beneath a distant dock. It’s like largemouth bass fishing. We have a few halfhearted follows in the high sun and heat. Soon clouds are building, huge fanciful shapes like masks, and we see one a giant manta ray.

Another move finds rolling tarpon. “Permit can be here, too,” Ken says, asking Dave to choose his weapon. “Last time, different fish kept coming, and I was switching—tarpon rod, permit rods—it was crazy, and we caught nothing.”

As if on cue, two permit schools appear. The fish are big. Guides at Caye Caulker are only now trying the smallest crab flies. For these deeper permit, it’s mostly been swimming shrimp imitations. Dave has on an Avalon crab fly.

Ken spins the big panga by bending his pushpole in a double-hernia effort. The pole straightens, and thrusts us forward. He’s still able to croak the command, “Throw it in their face!”

Dave does, and the fish eats. It snaps up a little line left on the deck and peels off the first of those wonderfully merry, dragzinging runs. A good while later, Ken raises the fish out of the water, and it’s pushing 20 pounds. Oh, yes, there is rejoicing, but we still have three more scenes in the final day of our performance.

They begin with catching a few bonefish. Then there is the deep narrow channel off a bank where curiously, just visible, little four-pound permit are running tight behind a school of bones. Dave finally plucks one out with a tiny crab fly. My hopes are dashed by a boat suddenly rounding the point much too close, spooking the fish. But we know Ken is now thinking slam.

The water is slick at Crocodile Beach, and off the bank near the sunken tire, tarpon are gently arching through the gray-green surface. I have on a splayedwing Keys-style fly that has escaped Ken’s scissors. Beginning the line pickup at the end of my second retrieve brings Ken’s reproach. “No, no, he was trying to eat your fly!” he says as a small fish pops behind. But my eye is on a larger fish at the perfect angle, and the cast is away, fly swimming, and that tarpon eats just fine. Redemption! Ken nets the fish. The tarpon continue to roll, and Dave has no trouble feeding one, completing his slam. Ken is now quite happy with us.

As we run fast back to Caye Caulker, I glance behind at our laser-focused guide and have an incongruous, unwarranted image of him playing in the final passage of Tom McGuane’s 92 in the Shade. I see Ken standing, wearing Olie Slatt’s Speedo, white bathrobe billowing behind him as he runs poor murdered Tom Skelton’s skiff, and I laugh at the outrageousness of it. Far from foiled lives at his feet, Ken now has two happy anglers aboard who, to paraphrase the survivor in Mel Gibson’s epic Mayan saga Apocalypto, are already plotting a way to return to permit country “and begin again.”

Jerry Gibbs lives in mid-coast Maine, where he is certain that a winter away from Green Lizard Juice, coupled with sessions of power snowshoeing and repetitively casting a 12-weight around tidal ice floes, have put him in shape for his next go in the bow of Ken Coc’s panga.

Caye Caulker can be reached in a day’s travel, even from the East Coast. Once in Belize City, you have the option of taking a cab downtown, then a water taxi to the island, or simply walking to the Tropic Air desk and hopping a 10-minute flight to the island.

Nine- and 10-weight outfits with floating lines will be your workhorse tackle for permit and junior tarpon. But bring sinking tips. We used 8-weights for bonefish, though a lighter outfit would suffice. It’s possible larger tarpon (80 to 100 pounds or more) may be present in early spring, in which case, a 12-weight would be welcome. The usual bonefish flies are fine. For permit, consider fleeing and spawning shrimp patterns, including Avalons, all in various sink-rate configurations. The smallest Bauer Crabs or Craig Mathews’s Turneffe crab patterns will work. For tarpon, the go-to pattern is the Puglisi Mullet and Peanut Butter–style streamers, especially in purple/black, but take other colors. Splayed-wing Keys tarpon flies also are fine. Tarpon bite tippets in the 60-pound range are usually perfect, though having 40- and 80-pound options is wise. Choose 16- to 20-pound class tippets for both permit and tarpon.

No need for dedicated flats boots, but take a pair of disposable sneakers in case you try a bit of do-it-yourself bonefish wading at the island’s south end below the air strip, where there are hard flats. The mangrove shoreline north of the Split can produce a variety of fish. Stay at Sea Dreams hotel, and you’ll have use of a kayak and canoe. The hotel is an excellent choice, with Wi-Fi and TV, and owner Haywood Curry offers various fishing packages at www.seadreamsbelize.com. We booked our complete trip through Yellow Dog Flyfishing Adventures (www.yellowdogflyfishing.com). The company will provide answers to more questions than you’ll think to ask. Cameron Davenport is the Belize specialist. Guide Kenan Coc (www.chasintail.bz) and Haywood Curry may also be booked on a daily basis, if available. A handful of grocery store plastic bags will find myriad uses. Snack bars for the boat, and a length of parachute cord for hanging bathroomwashed fishing clothes, will also be handy. Two of our favorite evening eating establishments are Rose’s Grill & Bar and Wish Willy Bar & Grill. Use Sea Dream’s bicycles in the evenings, but take care not to hit dogs sleeping on the back roads. A head lamp is nice to have. A laid-back, funky hideaway, what Caulker lacks in upscale amenities, it makes up for with great eating and even better fishing. M