For the remainder of the week, most anglers in our group returned to the bonefish flats a few more times, while others were content to cast at singles and small groups that they’d find while chasing other species. As you might guess, those fish were typically much larger than the big hordes we saw on the first day. The schoolies on sand averaged an honest two to three pounds, but the smaller “finger flats” of coral and turtle grass produced a number of five- to sevenpound fish, and we all had a few of those gasping moments when a much larger single would appear.

While fishing for large Indo-Pacific predators had been well documented long before the Seychelles opened up, wayward anglers were happy to hear of another place where they could be punished by the alpha thug of the flats.

There are several species of trevally at Alphonse; most prevalent are the bluefins, brassies, and giant. The brassy trevally is less common and typically tops out around 15 pounds. Bluefins hunt in packs, devour flies, and light up like neon beer signs when you throw something foodlike in their direction. Small bluefins are a blast on a bonefish rod, but you’ll want something bigger if a twofooter eats your fly.

The largest of the trevally family hunts Alphonse in good numbers, but he’s not easy to catch. The giant trevally (GT), can top 100 pounds and strip backing from a reel at arbor-melting speed. He hunts the edges, sometimes in “rat packs” but typically alone or in pairs.

When I arrived at Alphonse I assumed that GTs weren’t much different from jack crevalle. Well, they’re built the same, but that’s about it. They’ve both got massive shoulders and big appetites, but I didn’t encounter one GT in a week of hard fishing that I’d say was anywhere near as dumb as the typical jack crevalle. GTs are savvy and mean. They’re masters of ambush, and they will never eat something blooping slowly through the water. I’m guessing that’s because GTs are used to everything running like hell when they show up.

A bit of advice: first, if you’ve never fished GTs you should spend a lot of time before your trip with a 12-weight throwing lots of line into the wind with big heavy streamers and poppers. I’ll say that again: big and heavy, into the wind. If you can’t load up with one or two false casts and get 60 feet of string moving quickly, you’ll have trouble catching a GT at Alphonse. Second: lead the fish by one to two rod lengths and learn to strip the fly like mad. A GT will often spook from a fly that lands too close, and will snub anything that slows down or stops.

Beyond all that, just pray for some luck. You’ll need it when the town punk eats your fly and dives off the flat into a maze of coral heads.

Next in order of attraction is the ubiquitous and eccentric triggerfish. There are three available species at Alphonse: mustache, yellow margin, and Picasso. With enough water to cover their backs, you’ll find them tailing and noodling for crabs on most of the coral and grass flats. When the tide drops they’ll retreat to the edges and wait for the next push.

The guides at Alphonse love chasing triggers. They’re smart, they love crab flies, and they’re easy to spot. Picture a lit-up jack-o’-lantern over turtle grass. The difficulty with triggers is the presentation and the hookup. They’re typically surrounded by other fish that are much more agile, so flies thrown to triggers are often snatched by something else. They’re also very spooky so a long accurate cast is important. Triggers will often track a fly all the way to your rod tip, and feeding them can be tricky. It’s a subtle take that requires a delicate touch. 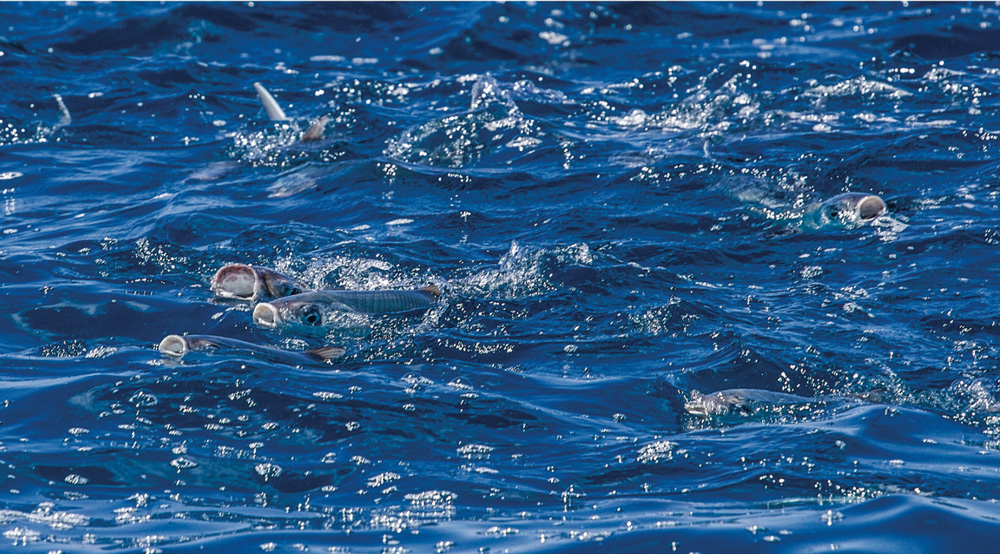 The Indo-Pacific permit was once considered an incidental catch at Alphonse, but recently the guides have made them more of a marquee specie. The Indo looks exactly like our Atlantic permit except its tail and fins are gold instead of black. I had a few permit shots during my week at Alphonse, and what I immediately noticed is that they seem to be more calm and methodical than their American cousin. I didn’t see the trademark herky-jerky mad dashes that we often see at home, and these permit seem to feed more deliberately. Still, they’re permit, and it takes a good presentation (and some good juju) to catch one.

When fly-casters first arrived at Alphonse, the milkfish was considered pretty much uncatchable. It’s a mulletshaped vegan that can top 40 pounds. While it’s most often found in deeper water, it often feed on the flats, as well. Over the years the Alphonse guide team has perfected techniques for catching milkfish, but one trick remains: finding them in a mood to eat a fly. The best-case scenario is when an algae or plankton bloom happens in the lagoons and the milkfish gather on the surface in great filter-feeding mobs. That didn’t happen during our visit, but guests who’ve caught them on previous trips said that it’s one of the biggest fights you can sign up for.

As a bonus program, Alphonse also offers a prolific bluewater fishery with comfortable sportfishing boats and capable crews. With deep blue water located just a few hundred yards from the atolls, it’s not uncommon to split a day between flats and offshore with a chance of a billfish and bonefish slam. On the day we fished outside, there was a sailfish and wahoo landed on the fly and dozens more teased up. Marlin, tuna, and mahi are also occasionally found.

From here, I’ll lump everything else under the broad category of incidental catch. The reefs are loaded with grouper and snappers and the flats are positively alive with both predator and prey fish; it’s the most dynamic shallow-water fishery I’ve experienced, and that brings me back to the earlier mention of the food chain.

On my second day I had flies stolen by four different species when casting to triggerfish on the flats: a spangled emperor, a yellow-lipped emperor, a honeycomb grouper, and a wrasse. On one of my permit shots, the fly was snatched by a six-inch bonefish. Ever-present on the flats and scattered among target species are surgeon fish, emerald parrots, lemon sharks, sea turtles, and stingrays the size of car hoods. When ripping poppers over coral heads one afternoon, I thought I had hooked the mother of all GTs, but it turned out to be a five-foot barracuda that quickly robbed me of a $12 fly.

Aside from the ongoing piscatorial cage fight among the incidental species, the one Alphonse encounter that will forever stick in my mind involved a small knot of bonefish that we found working the edge of a shallow sandbar and a deep grassy trough.

When I hooked one of the bonefish, they all peeled out over the dark grass in about three feet of water, only to return seconds later running directly at me in a wild panic while I tried to gather the resulting slack.

Just as they made it safely back onto the sand, there was a huge boil at the edge of the grass trough as the predator that was chasing them thought better of beaching itself on the sand.

“Can a GT eat a bonefish that size?”

“He can eat one twice that size if he can catch it.”

Chuck Darwin would have loved the Seychelles.

Tosh Brown is a sporting photographer and writer based in Austin, Texas. He specializes in hunting, fishing, and travel imagery for the outdoor industries. View more of his work at www.ToshBrown.com.