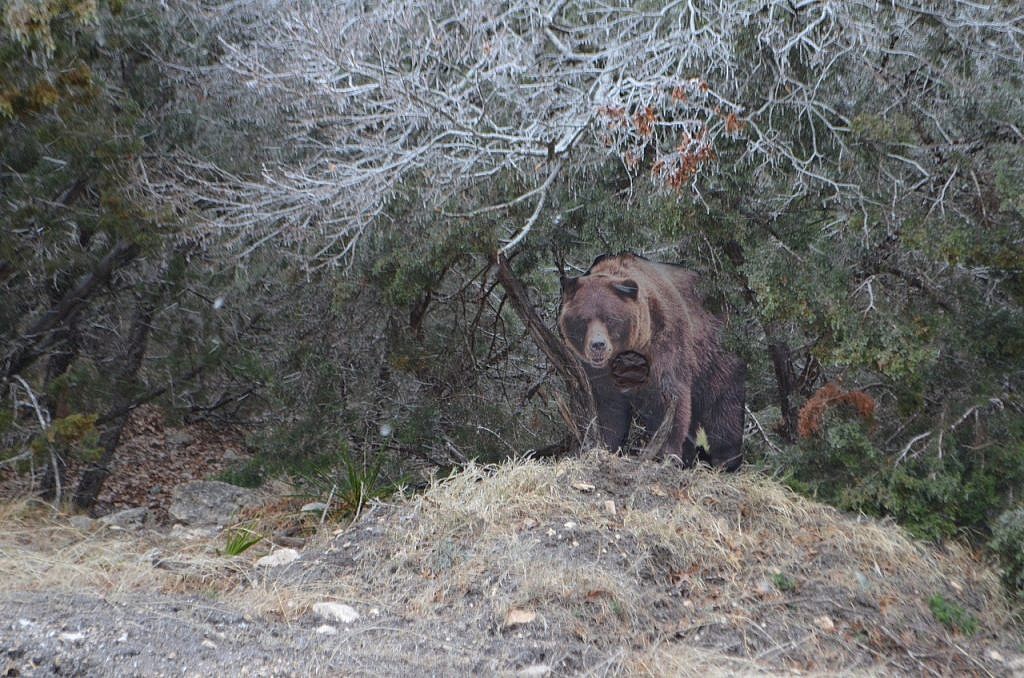 The FTW Ranch, in the Texas hill country west of Kerrville, is one of my favorite places to visit, not just because of the fantastic training facilities, but also because of their dedication to ethical hunting.  Every time you turn around at the FTW, you see the admonition that it’s the hunter’s job to kill an animal with the first shot, and if you are not a hundred per cent certain, then you need to get closer.

You can learn to shoot at long range at the FTW, taught by some of the best in the business, but what is more important, you learn when you should not shoot — that is, your own limitations. However, if you learn to put your bullets where you want them, every time (under admittedly controlled conditions, at a definite known range) then you will find a 250-yard shot to be child’s play.

Along with its vast array of targets, out to 2,700 yards (!), usually shooting from one hilltop to another, the FTW has a couple of unusual training facilities.  One is the dangerous-game walk, a trail up a wooded hillside with targets that appear unexpectedly.  As the student creeps up the trail, he (or she) is accompanied by an instructor who is an actual Zimbabwe professional hunter. He knows, first-hand, what’s involved in a sudden encounter with a Cape buffalo, the appearance of part of an elephant through the brush, or sitting in a blind waiting for a leopard to come to a bait.  The instructor controls when the life-size target pops up.

This year, the FTW has added a target to this facility — a grizzly that appears from the brush.  Granted, there are no grizzlies in Africa, but as Tim Fallon told me, “We wanted to offer something realistic for hunters going to Alaska to hunt brown bears, and this was the appropriate place.”

The FTW is adding a second, similar course called the “jungle walk,” which they are in the process of setting up, but it is devoted to smaller game found in thick cover, such as the bongo or bushbuck. The key difference is that a hunter would carry a much heavier rifle hunting a brown bear than he would a bushbuck, so the bear properly belongs with the Cape buffalo and elephant.

Of course, you can shoot either course with any rifle you like — light or heavy, with or without a scope — but most students go to the FTW with the idea of training with the rifle they will be using, and often ahead of a scheduled hunting trip to Africa or Alaska.

When I was there in mid-February, another other client was training for an elk hunt in the mountains of Montana later this year. He planned to take a .300 Winchester Magnum, and that’s what he was shooting, starting with testing various types of ammunition, then sighting in, then training on targets out to a thousand yards.

The FTW has training staff from a wide variety of backgrounds. As well as the Zimbabwe PH, there is a former Navy Seal, and an army sniper-instructor.

The two game walks offer the opposite kind of training to the long-range steel plates — shooting fast, at close range, at a target which appears unexpectedly.  It’s a bit like the old “quail walk,” which was offered in the days before sporting clays, but with the added spice of heavy recoil and the chance of being eaten (figuratively, at least) if you miss a vital spot. Sounds safe and easy?  You would be amazed just how realistic it is.

The FTW can be reached at www.ftwsaam.com.

Terry Wieland has been Shooting Editor of Gray’s since 1993 and is the author of a dozen books on hunting, shooting, and history. His latest is Great Hunting Rifles — Victorian to the Present, published by Skyhorse in 1997. Last year, Skyhorse reprinted his acclaimed 1999 book on Robert Ruark, A View From A Tall Hill.