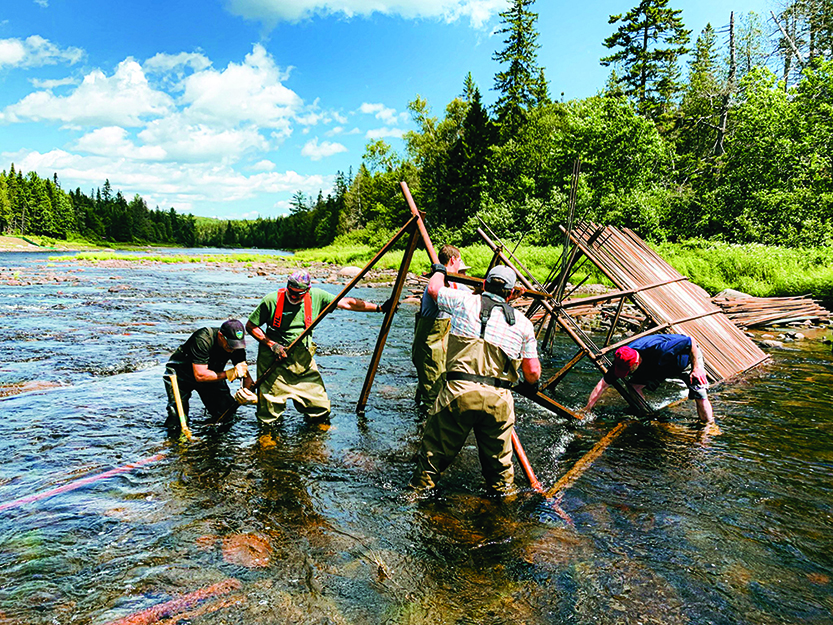 The race is on to protect a fishery, and a species, already in peril.

In 2008 illegally introduced smallmouth bass, alien to the Miramichi system, turned up in Miramichi Lake, high on the river’s southwest branch. Smallmouth bass thrive in rivers. In fact, they evolved in moving water; that’s why they have larger fins than largemouths. If they get established in rivers supporting Atlantic salmon, they can conceivably compete and consume them out of existence—especially if the run is depressed, as is the Miramichi’s.

Swift action with the short-lived, organic piscicide rotenone—the only tool for eradicating invasive fish in almost all non-drainable lakes—could have ended the threat. It would have been applied at 75 parts per billion (PPB). In still water rotenone degrades and vanishes in several weeks, and in moving water it can instantly be removed downstream of treatment areas with the short-lived oxidizer potassium permanganate. Rotenone for invasive fish eradication has been declared safe by Health Canada and the U.S. Environmental Protection Agency. In modern fisheries management it has never been seen to permanently affect an aquatic ecosystem except to restore it.

Swift action was not forthcoming. Fisheries and Oceans Canada (DFO) announced that it wouldn’t use rotenone, claiming it lacked authority. But in 2001 it had authorized rotenone to eradicate illegally introduced chain pickerel from Despres Lake, also feeding the Miramichi. DFO further proclaimed that 593-acre Miramichi Lake was too big for rotenone treatment. But in 1990 Utah rotenoned 17,164-acre Strawberry Reservoir to create a sanctuary for imperiled Bonneville cutthroat trout.

In 2010 DFO commissioned a review of “options” in which the author reported what every fisheries professional already knew—that rotenone was the only reliable tool. Rather than authorize rotenone DFO scientists at the Gulf Fisheries Centre in Moncton hatched a plan to remove smallmouth bass by electrofishing, gillnetting, fyke netting, beach seining and angling. Plans were also made to contain them with a seasonal barrier at the outlet. For this work it relied on conservation groups and provincial and federal staffers. No fisheries professional believed the plan would succeed.

It didn’t. Young of the year bass kept turning up. Still, in July 2018 DFO announced that it “will not be a proponent for a chemical eradication project in Miramichi Lake and will remain solely as a regulator for such a project.”

In September 2019—after 11 years of inaction save for removal and containment efforts known not to work—smallmouth bass were documented in the Southwest Miramichi River. DFO okayed an amended application to treat the lake as well as its outlet, Lake Brook and 13.6 kilometers of Southwest Miramichi.

The project was scheduled for August 17th and 18th 2021. Trained volunteers and 120 fisheries professionals were assembled in the field along with supplies and equipment. There had been nearly three years of constant and copious concerned consultations by DFO and the Working Group with all stakeholders. As a result, the province received 1,290 letters of support.

Salmon are sacred to the First Nations. That’s why the North Shore Micmac District Council led the eradication effort. But 12 women from the Tobique and Woodstock bands, calling themselves the “Wolastoqey Mothers and Grandmothers,” proved the old saw that “a few citizens can make a difference.” They proved also that this isn’t always a good thing. Applicators won’t apply rotenone when people are on a water body, so the women blocked treatment by paddling around in canoes. A court injunction filed by the Atlantic Salmon Federation failed.