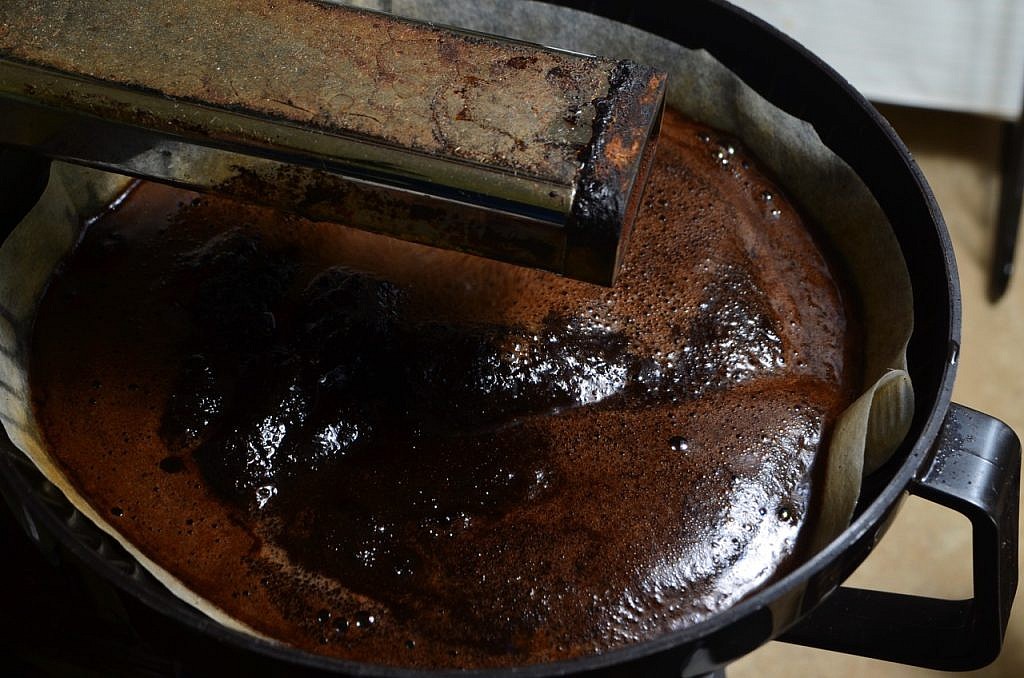 Strong? Here’s how strong: This filter contains two complete grinders full of freshly, ultra-finely ground, French roast. It will yield a little over one mug full to start the day.

George Orwell is remembered as the author of Nineteen Eighty-Four and Animal Farm, but before those two global best-sellers made him financially secure, he made his living primarily as an essayist, writing for a wide range of English periodicals.

Orwell looked upon essay writing as a way to pay the bills, but he approached it with the same dedication he showed elsewhere in his life, and is now regarded as one of the greatest of all English essayists. Probably his most famous is “Politics and the English Language,” wherein he set out seven rules for clear, effective writing that are as valid today as they were in 1946 — perhaps more so, given the lamentable state of modern education.

His other topics ranged from an in-depth analysis of the works of Charles Dickens, to English cooking, to Henry Miller and Tropic of Cancer in modern literature, to the question of whether socialists can ever be happy. Eclectic, to say the least. During the war, when the English were subjected to rationing, he turned his attention to “A Nice Cup of Tea.”

Here, also, he set out rules — eleven, in this case — dictating how tea should be made, the utensils involved, and the etiquette that is so important. I confess, at various times in my life, to being an enthusiastic tea drinker, but I never graduated beyond Twining’s Earl Grey in a bag with a string, something Orwell would have found barbaric.

Instead of tea, my vice is coffee — my last remaining vice, and I’m not giving it up! as I’ve been known to growl, bark, or purr, depending on the circumstances. Four of Orwell’s rules — all of which he considered “golden,” although he acknowledged that some were controversial and at least two had been known to start intra-family battles reminiscent of the Dreyfus Case — four, as I say, can be applied equally to coffee.

First, it should be made in small quantities. In coffee’s case, amounts don’t come much smaller than the classic espresso, as made in Spain (my favorite), Italy, and France. Orwell points out that tea from an urn, particularly an army urn, tastes of grease and whitewash. Coffee’s the same.

Second, as with tea, the coffee cup should be heated ahead of time, so the coffee does not cool on contact.  This is why cups are kept on steam shelves in the big espresso machines in Europe.  To give an idea how little Starbucks and its pimply employees know about coffee, one time I ordered an espresso and was told the district manager had ordered that no cups should be kept on the steam shelf because it was “unsanitary.” Ignorance is not confined to age or position.

Third, coffee should be strong. Orwell said one strong cup of tea was worth 20 weak ones — an important point during rationing. “All true tea lovers not only like their tea strong,” he wrote, “But like it stronger with each year that passes.” The same is true of most coffee drinkers.

I’m my own best example, but I can’t think of any coffee drinker of my acquaintance who did not follow this trajectory. I began drinking coffee when I was 15, and for a long time put cream and sugar in it. Gradually, the sugar was reduced from two spoonfuls to one, to none, and then the cream was eliminated.

From that point, the black coffee became stronger, but I also concentrated on making it better, first with the quality of the coffee, then by grinding the beans immediately before making it. I eventually embraced the practice of roasting my own beans, and becoming finicky about where the beans came from. All of that is too lengthy to recount here. Suffice to say, I insist on French roast beans and grind immediately before brewing where possible. And strong? Most of my friends won’t drink it, which is fine with me.

Orwell pointed out that “those misguided people” who insist on sweetening their tea should try it without sugar for a fortnight, after which “it is very unlikely you will ever want to ruin your tea by sweetening it again.”

I should point out that taking coffee black is immensely useful, logistically, if you are on a hunting trip in the mountains.

Speaking of which, one hears rapturous accounts of “cowboy” or “mountain” coffee, usually concocted by throwing a handful of Folger’s into a pan, boiling until the grounds spill over the edge, then settling the grounds with a splash of cold water. Oddly, in some circumstances, I’ve found this to be drinkable when I didn’t have my own portable proper-coffee maker with me, but it was a case of needs must.

Generally, I would rather have a cup of good tea than one of bad coffee, and if we are traveling ultra-light, I carry some Twining’s Earl Grey tea bags with me. They’re useful insurance.

Gray’s shooting editor, Terry Wieland, was not surprised by Orwell’s observation that the question most likely to provoke a Dreyfus-like episode in a tea-drinking family is whether the tea goes into the cup first, or the milk. A similar conflict between Wieland’s mother and paternal grandmother caused long silences for years. He’s not taking sides since, fortunately, he likes his tea Orwellian black and strong.