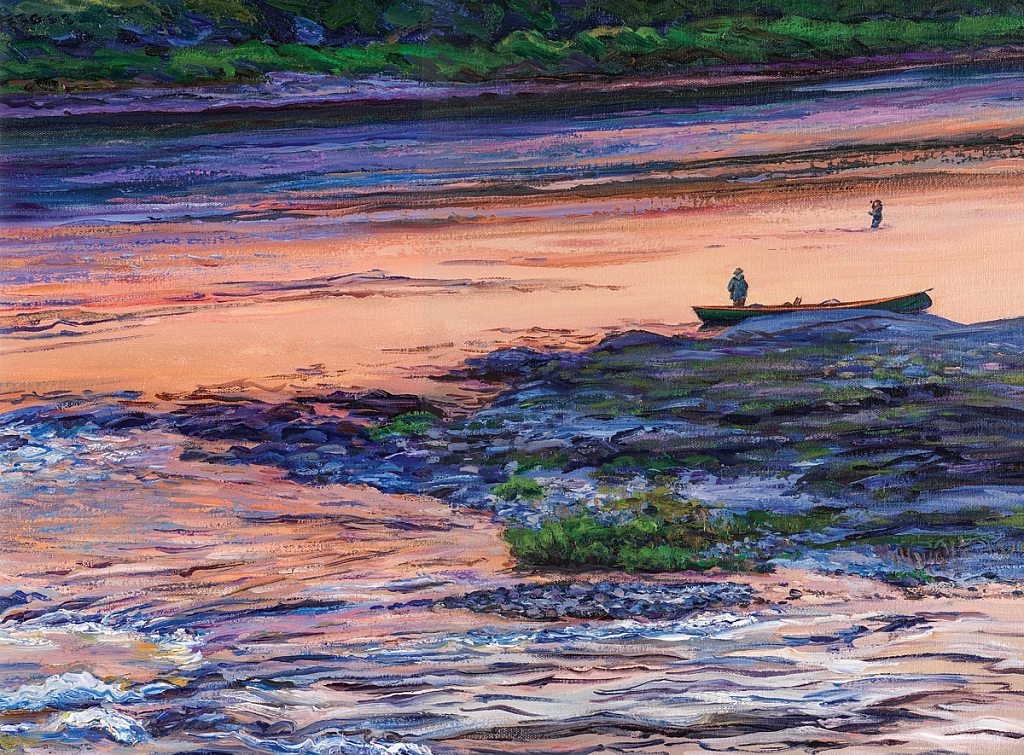 That morning I fished with Hank and Sandy. We stopped first at Upper Glory, a lovely deep and wide pool around a very large protruding boulder. A rickety, dangerous, and unused wooden platform pushed its way 10 feet from the shoreline. Hank had the first chance at the pool. I watched as he tied on a Shady Lady and put it to work. He began with four feet of line—cast and drift, pull out another foot of line, and cast and drift again. He repeated the process for half an hour until he’d covered every part of the pool. Sandy and I waited near the shore, talking quietly.

He yelled, “Pass me the rod! Thread it under the dock.”

My turn. Hank had fished a Shady Lady, so I, remembering what Doak had said, tied on a Green Machine. I proceeded just has Hank had: four feet of line, cast and drift. Another foot of line, and the same. Six feet of line and—I watched the whole thing through the clear water—a hidden fish rose from the bottom and a wide mouth engulfed the Green Machine. When the fish turned and I felt a light touch on the rod, I brought the rod up hard and set the hook. That salmon erupted from the water 10 feet from me. Water hit my face. I remembered—barely—to bring the rod down and point it at him as he flew through the air dancing on his tail. The Atlantic salmon is not called the leaper for nothing.

“No kidding!” said Sandy as our eyes met, and both he and I grinned like madmen. And the fight commenced.

A guide is an important part of fighting and landing a big fish. He knows the pool and can work you past large rocks and sudden drops. You are awkward in waders and fully engaged with a running, battling, leaping fish. The line is screaming from your reel, and you are trying to hold on to the rod as it bends, twists, and jumps in your hands. You don’t have time to concern yourself with firm footing or the depth of the water as you reel in slack or let the fish run. Early in the fight, if the salmon is big, you go where the fish takes you—and I had hooked a big salmon.

“Lift the rod,” Sandy screamed, “he’s headed behind the big rock! You’ll catch your tippet and break off.” I lifted. The tippet was clear of the sharp edges of the rock.

Then, “Point your rod! He’s in the air!” As if I didn’t know it was in the air, but I needed the reminder to lower and point the rod. That’s what guides are for—the man with the rod gets the rush, while the guide stays cool and collected, mostly. But when it’s a big fish, everyone gets excited—including the guide.

“Bring the rod up, Bob! Bring it up!” And up the rod went, and that lovely bend was back. And so it went.

The fish headed for one of the wooden supports of the old platform. It swam behind the dock’s leg, and my frail 10-pound tippet followed. Then the actual fly line and my rod. Sandy splashed through the water to the other side of the dock.

He yelled, “Pass me the rod! Thread it under the dock.”

I did so. He grabbed it, got the line out of the platform, and as I waded to him, handed me the rod. The fish and I were back at it with the salmon out of the water shaking and me pointing the rod. More screaming line ripped from the reel. Back to the boulder and another leap. A big, beautiful, bright, strong, fresh-from-the-sea fish. Extremely irritated. Finally and very unexpectedly, the fish began heading right for me. I reeled line in a frenzy of anxiety, trying to eliminate the slack.

Reel I did. The fish, however, outpaced me, but on its way toward me, it had to pass Sandy, who saw that the fish was too fast for my frantic reeling. Sandy decided to gamble, bet on himself, and won.

With remarkable timing and a lightning movement of arm and wrist, Sandy scooped the salmon into the net. To my eyes, the fish swam into a blur of spray, arm, and swiftly moving net. I still shake my head at the gamble. If the net had touched the line, the salmon would have broken free. I do think that I’d stake my guide, Sandy, and Rob’s guide, George, at a poker table, confident that we would win. Lucky, yes, but experience and coolness count—a lot.

After admiring the large fish, we carefully released him and watched as he swam strongly away—a big, bright 20-pound salmon, fresh from the sea.

I poured the drinks that night, and Hank backed up the story. We drank toasts to the released salmon, the wizards with the nets, and to Green Machines and Shady Ladies.

Robert Sohrweide is a retired teacher of Latin and Greek at the Hotchkiss School in Lakeville, Connecticut. Today, he lives in Lyme, New Hampshire, where he fishes and hunts grouse, woodcock, geese, ducks, trap, skeet, five stand, and sporting clays.