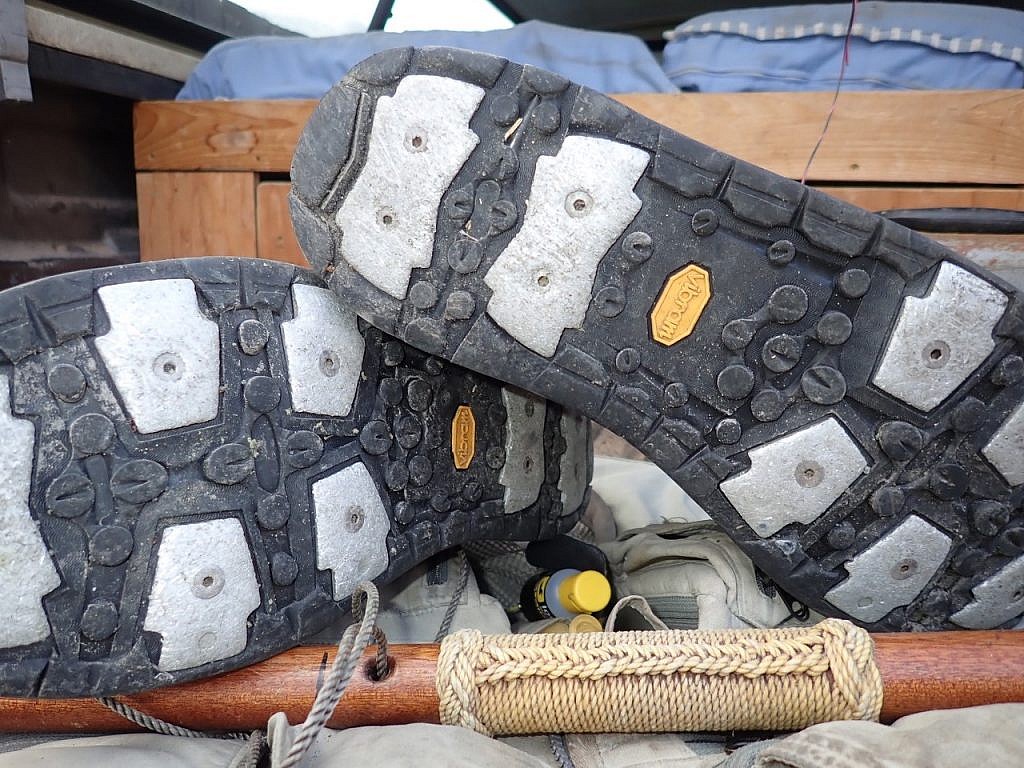 Modern soles on wading boots are just one way anglers can help prevent the spread of invasive aquatic species.

Spring in the air, it’s as good a time as any to remind ourselves that we’re under attack.

And who can calibrate the damage already inflicted, here near my home in the Pacific Northwest, by seemingly benign invasions of, say, American shad (Alosa sapidissima), which will pass later in spring through lower Columbia River dams in daily six and sometimes even seven-digit numbers, verified in official fish counts – or the frightful reach of the amiable smallmouth bass, which now inhabit so much of the John Day River, one of the last un-dammed refuges of precious wild steelhead, that to cast a fly for them is about as challenging as dip netting for Pacific or eulachon smelt (Thaleichthys pacificus)?

Which, by the way, are now also listed, along with innumerable other native fish, under the Endangered Species Act.

What’s a lowly sport angler to do?

One suggestion, right here at the start, is to take a look at Dan Egan’s The Death and Life of the Great Lakes. In it, Egan traces the convoluted history of Great Lakes fisheries, dramatic and sometimes disastrous changes, often the result of well-intentioned interventions by fisheries biologists.

I can never keep track of all the details in this sort of scientific tale (it reminds me of trying to follow John McPhee in his books about geology), but you come away with a clear sense of just how serious and damaging an invasion of non-native species can be to an aquatic environment, especially to indigenous fish at the heart of the sportfisher’s game.

It’s a complicated fight. While I can’t imagine anyone hoping to see those northern pike spill over the Pend Oreille River’s Waneta Dam and into the American reach of the upper Columbia, just below the Canadian border, I know there are anglers throughout the Columbia basin who are perfectly happy fishing for walleye, not salmon or steelhead, for chrissake.

As confounding, perhaps, are recent studies showing that attempts at complete eradication of invasive species can actually backfire, with targeted species “bouncing back with a vengeance” – a type of Hydra effect, as described in one report.

The good news is that state and federal agencies throughout the West have made the battle against invasive aquatic species a priority; any floating device, boat or personal watercraft, is now subject to inspection whenever you cross state lines or, last time I did it, into Canada.

Headed to Baja, I recall cussing under my breath when a gal in uniform demanded I take floor boards out of Madrina, my traveling beach yawl, so I could remove the drain plug as prescribed in California’s regulations – but the fact is boats are one of the biggest culprits in the spread of invasive species.

Of course, we all know to attend to our boots and waders. I confess it took me a long time to finally yield to pressure to swap out wading felt for modern soles; I selfishly felt it was more important I avoid drowning rather than avoid the transport of sneaky critters from one watershed to the next.

Recent combinations of high-tech rubber with aluminum bars seem to keep me on my feet more times than not – although I still miss my felt, the same way as if I were asked to take the field with a glove made out of something other than leather.

We each have to do what we can. Another recent study reveals that the pernicious zebra mussel was found in aquarium moss packages sold in pet stores in at least twenty-one states “from Alaska and the Northwest to Florida.”

It’s easy to imagine how any one of these moss balls could end dumped into a slough or other water way – not quite as dramatic, say, as a baby alligator flushed down a Manhattan toilet, but, in reality, a potentially far more destructive crime.

It’s been more than forty years since Gray’s angling editor Scott Sadil sold a story about the illegal transport of a largemouth bass from Peñasquitos Canyon, near San Diego, to a tiny pond alongside a garage room he rented in La Jolla.